St. George was and continues to be a Mormon town. It was settled in 1861 by Mormon pioneers who came to build their church and a city on the edge of the desert.

However not all pioneer residents in Southern Utah were Mormon. Despite the fact that almost all of the original settlers in St. George were members of The Church of Jesus Christ of Latter-Day Saints, there were a few outsiders who came to live among them - namely the Presbyterians.

Presbyterians, a group of Protestant Christians who organize themselves around elders, came to Utah in 1869 to build a mission church in the railroad town of Corrine. They opened several churches and schools throughout the state. In 1880, they opened a mission in St. George.

The Rev. A.B. Cort was sent by the Presbyterian mission board from Chicago to St. George to build a church. He was not well received. Antagonistic feelings against outsiders were running high in the community due to the Federal pressure against polygamy in the LDS church. During the 1880s, Federal marshals put the St. George LDS Temple under surveillance to discourage the practice.

Journals reveal that Cort was shunned by the community. Denied room and board by most of the people, Cort finally found a room where he could fix his own meals. He found no place in town to use as a meeting hall, but was able to secure a piece of property on the edge of town where he started a school, placing Anna Stevenson in charge.

Since there was no public education in Utah at the time, Presbyterians, under the leadership of Rev. Duncan McMillan, created a system of mission schools to provide free education and to teach religion. These schools were staffed by women sent as missionaries to Utah. St. George, under the leadership of Stevenson, was home to one of these schools. Cort established additional schools in the surrounding area in the former home of John D. Lee in Washington, Utah, with Virginia Dickey the teacher, and in Toquerville, Utah, where Fannie Burke was the teacher.

While Mormons were officially forbidden to attend these schools, the school in St. George soon had an enrollment of 14 and in Toquerville, a dozen. Sometimes there were no students in school and, as Burke - who served for more than 14 years - described it, if the people would not come to her, she went to them - in visitation, in loaning good literature, in nursing the sick, in instructing how to can, make pickles and sew.

Cort also started a mission church in Silver Reef, a nearby mining town. In 1881, Rev. E.N. Murphy came to Silver Reef as the resident minister. Services were held in the Citizens Hall on Saturday. The Silver Reef Miner, the local newspaper, reported attendance was very large, with some services having standing-room only.

All was not doom and gloom for Cort. It was reported that many a night his deep voice could be heard singing the hymns he loved. He married Stevenson and they had several children while living in St. George.

The Blackburns were followed in 1891 by Catherine Watt, who had been a missionary in Africa.

In 1893, Rev. Galen Hardy came to St. George with his wife. They enrolled 70 pupils in the school and more than 100 attended Sunday services. However, attendance continued to be sporadic. Dixie's wine was legendary for its potency and alcohol abuse was reported to be prevalent in the community, especially among young boys. Their ministry ceased in St. George with Galen Hardy's death in 1898.

During this period, Utah became a state in 1896. This marked the beginning of a change in relations between Mormons and outsiders. A symbol of this change can be seen in a report that on January 6 of that year, the Presbyterian mission bell, which stood in front of the mission - and later in the church - and upon which were inscribed the words, "Christ, the way, the truth and the life," rang in tandem with the Tabernacle bell for two and a half hours. Several years late, after Hardy's death, his successor, the Rev. G.M. Kilpatrick, gave the opening prayer for the July 4th program in the St. George LDS Tabernacle. 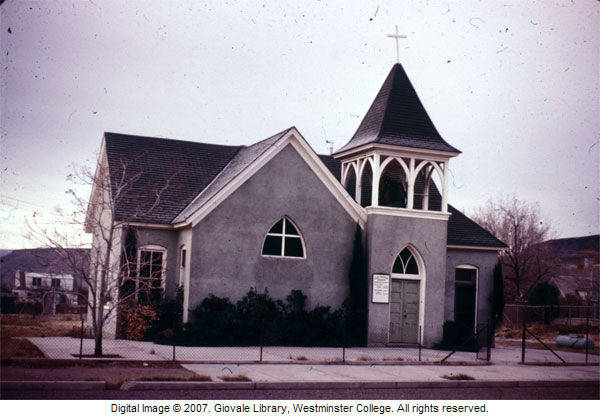 By 1908, when the Rev. Clayton Rice came to St. George, things had changed somewhat. Rice had come to Dixie fresh out of seminary in Princeton and he discovered a country he never knew existed. He fell in love with the desert and with the people who lived there. He directed community plays, trained debaters, taught violin and coached and played baseball. In fact, one year he was the only outsider on the town team when they played a group of non-Mormon oil riggers from the area. The Mormons won thanks to several hits from their Presbyterian minister.

Toward the end of Rice's tenure, a new mission teacher, named Miss Watson, had come to St. George. Unfortunately, not much is known about her or the times in St. George for Presbyterians until 1913. 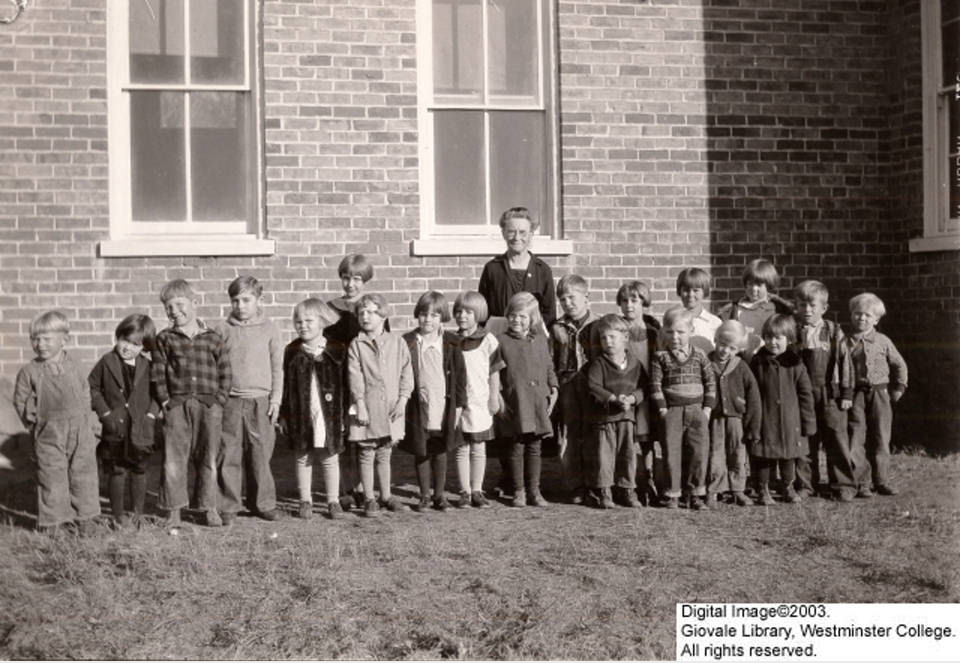 Sarah Louisa Conklin and her students

On January 18, 1913, Sarah Louisa Conklin came to town. She had served the Presbyterian Church previously in New Mexico, Cuba and Arizona. After arriving, she never left St. George.

Miss Conklin officially retired from missionary service in 1933 but she remained, in St. George, doing what she had always done. She died in 1949.

The old church remained vacant. A medium Protestant congregation arose and attempted to buy it. However, after years of frustration, the Presbyterian Church concluded that no Protestant church was viable in St. George and sold the building to the Roman Catholics.

In the 1980's, St. George's population began to grown and diversify. Roger and Katy Hansen, retired Presbyterian missionaries from Wasatch Academy, moved to St. George. They felt the need for a Presbyterian church and invited several others to meet with them in their home to discuss the possibility. With the aid of the Presbytery of Utah, under the leadership of the Rev. Robert Rigstad, a survey was taken in the community. It revealed only one person in 300 was interested in such a church. However, it did reveal a significant number of people would welcome a church more in keeping with their religious traditions. The preparation work for a new church continued with the approval of the statewide coalition of six Protestant denominations.

In January, 1987, the Rev. John Mahon, who had been serving in Oregon, was called by the Presbytery of Utah to organize a Presbyterian church in St. George. He arrived in March to find a group of 80 people interested in such a possibility. Worship began on April 8, 1987, in the St. George Senior Citizens Center. A year later, on April 10, the congregation was chartered on the same site with more than 100 members. Ironically, that site, the Senior Center, was the original West Side Chapel, which hosted Sara Louisa Conklin's funeral.

On June 10, 1990, church members young and old broke ground for a church home on the new edge of town. The building, housing a sanctuary, offices and a fellowship hall was dedicated on January 20, 1991. By 1993, Good Shepherd Presbyterian Church boasted more than 260 members. Hanging in the narthex is a picture of Sarah Louisa Conklin.